So 17 days have passed and the flame is out. It’s been crazy in places but none more so than today when Canada beat the USA to claim the gold medal for ice hockey. I’ve come to realise that most Canadians see the Winter Olympics as a ‘hockey’ tournament and the rest is just the build up.

We left our flat at 11.30am to see if we could find anywhere to sit and watch the game. No chance, the whole of the city centre was gridlocked with cars and people. There were queues outside every bar and pub and even outside every off-licence (the powers that be decided to shut the off licences at 3pm, so people were stocking up).  We managed to find a place right on the edge of town and settled in to watch.
Canada fans head to the city on Burrard St bridge just after the ice hockey win
Later in the day we went back into town and it was shoulder to shoulder crowds for miles. People waving flags and whooping. We then stumbled across the local news station. During the games, CTV news has been broadcasting live on the street in the centre of Vancouver. Their aim seems to be to get a big crowd behind the ‘Anne and Dominic’ of Vancouver to make the place look like party town (which it is). Trouble is, they do the Olympic round up, which usually consists of back patting about Canadian Olympic success, but then move onto regular news. The other night, they linked to story after story about murders and robberies, with hordes of whopping Olympic fans behind them. It was stunningly distasteful!

The Dominic Heale and Anne Davies of Vancouver. Not as good, obviously. 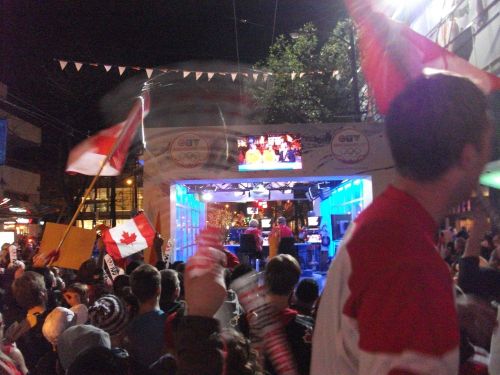 During every single link there’s a whopping crowd behind. Even if it’s a tragic story!
What’s more, there has been a growing trend for people to hold up ‘Investigate 911’ banners up behind the hapless anchors. Nich and I were in hysterics as we watched CTV minions desperately try to cover up the aforementioned left-wing-conspiracy banner with a giant Canada flag for link after link. If only they could see the visual metaphor.
haw haw

The big Canada cover up

Check out the teeth
Paralympics up next! Oh and I managed to briefly interrupt my drinking to help out a mate and shoot this piece today…
http://news.bbc.co.uk/2/hi/americas/8542351.stm
Enjoy!