I have my alarm set for 4.30am just in case I feel like waking up to watch Algeria v Slovenia tomorrow morning. Not likely but you never know.

This World Cup is already starting to remind me of Japan/Korea 2002 when we were all in England watching the games over breakfast. Over here in Vancouver, I was unsure how popular the tournament would be. Most people seem to know it’s happening and there is a decent amount of media coverage. The CBC is showing all the games live and have a selection of pundits based in Toronto. Among them is former Scotland player John Collins – not sure why, and a couple of English guys I’ve never heard of who are utterly terrible.  After enduring the CBC for the first day, we decided to get out and find a pub to watch England.
We got up early this morning to get down to a pub in town which had set itself up as ‘England House’ for the tournament. They were charging on the door but we thought we’d give it a try to see what the atmosphere would be like and to mix with some other Brits. Shockingly, when we arrived over 2 hours before kick off, the queue was around the block and growing. We stood in it for half an hour but were then told that we wouldn’t get in as the place was at capacity.  Turns out my underestimation about the popularity of football along with the realisation that a LOT of English people live over here got the better of me and we had to go elsewhere to watch the game. 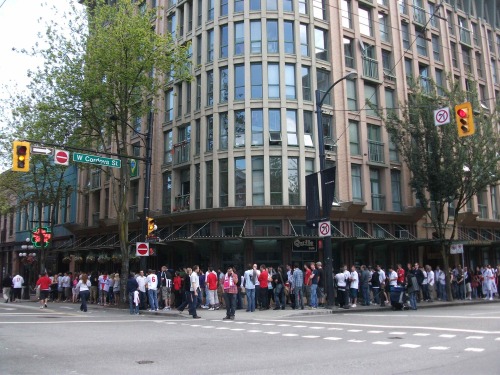 Big queue at ‘England House’
Luckily, there were no shortage of places and there were plenty of England fans in the pub around the corner. Not only did I meet people from England, I also bumped into Nottingham Forest fans, and a couple of girls from Hull of all places. They get everywhere. 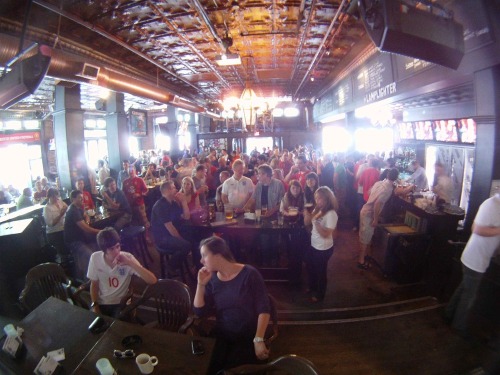 England fans in Vancouver = Beers at 9.30am
Not a bad result, although the mistake by Robert Green was a disaster. Feel sorry for him but he’ll not play again I don’t expect.
The best part of the day was after few beers we could get down to the beach to spend the afternoon chilling out and sobering up! I better watch it or the month of June and half of July could disappear quite easily down on English Bay beach. 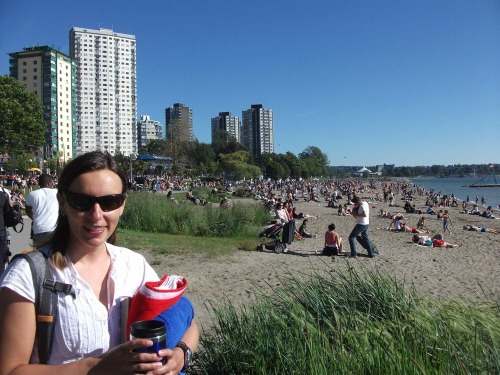