I’ve been meaning to write about our little day trip across the border for a week or so but i now finally have time as we sail across the Georgia Strait to Vancouver Island.  Nich had booked herself on a course at the Westin to see the ‘father of data visualisation’ Professor Edward Tufte, way beyond my current intellectual level (and budget), so I decided to come along to Seattle for the ride and hang out in the city for the day.

We hopped on a bus, faffed at the border and before you knew it there were Mcdonalds and armed police everywhere. Welcome to America!

Guns and Mcdonalds…and girls who say ‘like’ alot
Within about 5 minutes of wandering around, I stumbled across the first ever Starbucks coffee shop in Pike Market. It’s a pretty unassuming  place and the only reason I spotted it was because there were about a thousand Japanese tourists filming themselves wandering around inside and gasping in disbelief that the coffee tastes the same as the Starbucks on their street corner.  Hard to believe it’s now one of the most recognised chains in the world when you look at the place.

Starbucks first store
I then went out to Ballard to look around some music shops a friend had recommended but the crown jewel of the day was my trip to the Experience Music Project (basically, the museum of ROCK). The things that this town is famous for (apart from a coffee shop) are rock music and sci-fi, and the museum is a great place to visit if you are in any way interested in either. Here are the highlights of the sci-fi department… 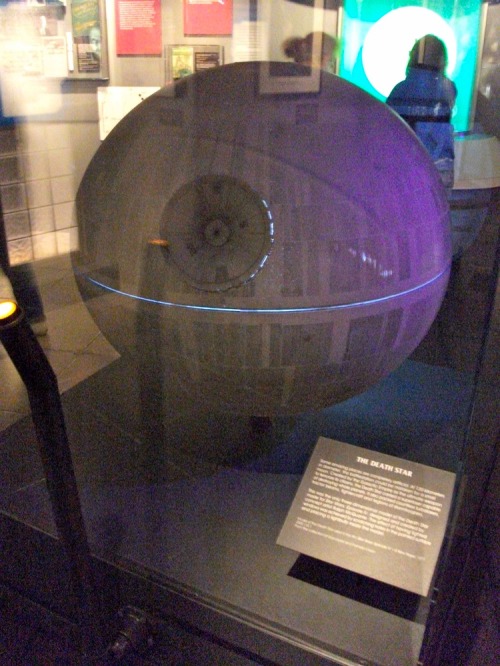 Yes, that’s the model of the Death Star they used for filming Star Wars. It’s about the size of a football.

Captain Kirk’s chair from Star Trek. I’m not a Trekky but I’d have this in the living room.

One of the Teenage Mutant Ninja (Hero) Turtles complete with….

…remote control! I’d have this in the living room too.

The original IPad. Steve Jobs gets all of his ideas from Star Trek it seems.
The rock music section was definitely more my thing. They have a whole floor filled with practice and jam rooms. You can turn up and have a jam on bass, guitar, drums, keyboards and vocals. I just plugged in the Ipod and played drums on a Tama Starclassic kit for a couple of hours. In the museum they have some great exhibits, mainly from the Grunge scene and Jimi Hendrix, both Seattle alumni. The greatest thing for me, though, was Eddie Van Halen’s Kramer super strat from the early 80’s.

Van Halen’s Kramer. I decorated one of my keyboards to match this in my youth. Bad idea.

The Fender Stratocaster used by Hendrix to play the US national anthem on THAT recording.

The last prototype Fe
nder Telecaster before production. 1949. Worth a fortune I’m sure.