I left my last post having arrived in Calgary, or ‘Cowtown’ as it’s known.  If there was ever any doubt that this is Canada’s cowboy country, you just have to look at the signs telling people where to walk to in the winter when it’s too cold to stay out on the streets.

Too cold? This way Mr Cowboy
We only spent one night in the city, where we sampled the nightlife by sitting on a patio in a bar facing the street watching an NFL game.  The bar had parked a massive van equipped with plasma TVs right outside so you could still see the game if you wanted to sit on the patio. Only in Alberta. 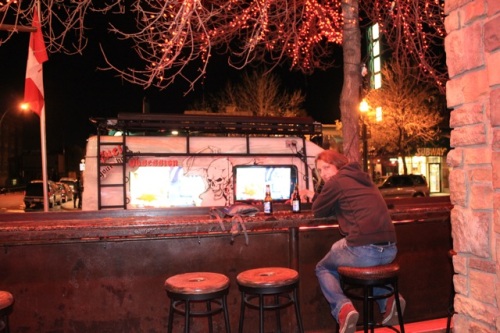 If I didn’t know that some poor mammal was being made extinct by this sort of extravagance, then I’d think it was a well good idea!
As we left the city we decided to stop at a local landmark which was a huge part of both our childhoods. No, not Disneyland or a film set but the ski jump from the 1988 Winter Olympics. Yes, it was here that Eddie ‘The Eagle’ Edwards soared into last place and single handedly changed the rules for Olympic qualification.  There was some rumour that he was afraid of heights but I think that was all rubbish. Ski jumps are absolutely massive and I wouldn’t like to try it – especially in a pair of jam-jar-bottom specs.

Nich doing her best Eddie Edwards impression in front of the 1988 Olympic Ski Jump
So, onward, back into the monolithic mountain range we travelled. It’s a truly stunning drive from Calgary to Canmore and it was made all the better by some really great weather. However that was all to change the next day.
Now we were sans companions, we decided that we were going to rough it a bit and stay in Hosteling International’s network of wilderness hostels for the rest of the trip. The first night was spent in Mosquito Creek, which has the bonus of having a very rustic sauna. After dinner, as night fell, we decided that it would be a great idea to sample it, since there are no showers in wilderness hostels. Of course, you have to build the fire yourself and get the heat up before you can hop in, and then there’s the ‘swimming pool’, which is the Athabasca River. Straight off the glaciers, you’re looking at a water temperature of 5 or 6 degrees Celsius, so more like a cold plunge pool. It was a great experience. scurrying between the river and the sauna in the dark, especially when the heavens opened. We were later joined by one of the other two hostel guests, a German IT consultant who, being German, thought it best to whip off his pants and do it properly. Needless to say Nich turned off her head-torch at this point.
The next day, the rain held which made for a disappointing drive through fogged peaks up the Icefields Parkway towards Jasper. Luckily though, as we climbed we got a break in the weather and made it out onto the Athabasca Glacier.  A combination of warm temperatures and rain meant that there was a huge torrent of water gushing from the toe of the glacier. We chatted with a few nutters who were walking up with skis and tents to spent the night among the crevasses before skiing down the next day. There were also various mountaineering courses being conducted on the ice. 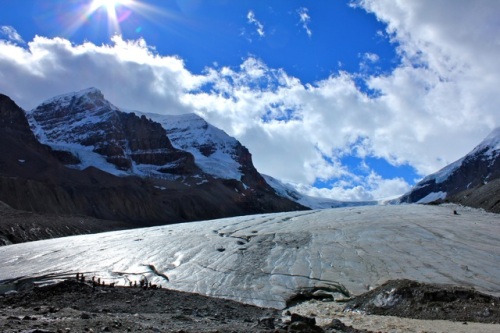 Trainee mountaineers prepare for their day at the toe of the Athabasca Glacier
We spent that night as the lone occupants of the hostel at Mount Edith Cavell and were treated to a cosy night with a fire in our bedroom and one of the most amazing night time views I’ve ever seen.

Mount Edith Cavell at night. As seen from the wilderness hostel at it’s base
A great days hike up to Cavell Meadows followed (including more sightings of our new favourite animal, the Pika) before we made it to Jasper and Maligne Canyon hostel. By the previous nights’ standards, it was packed and we were given a room with 4 other guests. Not great, but, after finding out that the German-born hostel manager was in fact a massive English football (and Arsenal) fan, I managed to bribe him to open up a new dorm room, just for us, with a viewing of the latest edition of Match of the Day on my Mac. He loved it, despite watching his beloved Gunners go down 3-2 at home to West Brom.