I spent last Wednesday at the Olympic Park in London. I was filming as part of the celebrations for “London 2012: One Year to Go”, mainly inside the brand new and hugely impressive aquatics centre. I’ve never seen so many media crews in one building. Literally hundreds of cameras swarmed around the pool and diving area. 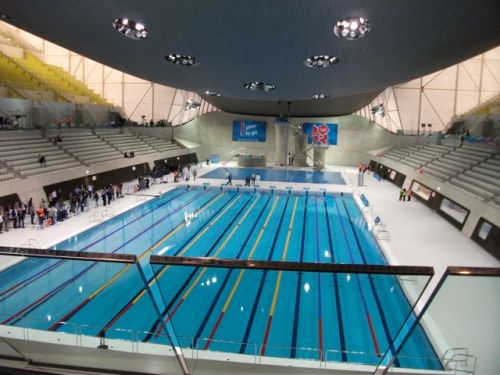 The pool at the new Aquatics centre for London 2012. Impressive.
There were plenty of Olympic related faces around. IOC president Jacques Rogge turned up and I managed to film the amusing spectacle of Seb Coe, Boris Johnson and Culture Secretary Jeremy Hunt all lined up together to greet him as he stepped off a little bus. Boris Johnson was great. I filmed three separate interviews with him and he was different and engaging in each. Such a difference to the media robot politicians we have running the place at the moment. It’s a damn shame he’s totally bonkers.