When browsing the BBC Jobs section a few months back I spotted the advertisement for the role of ??’Director’ ??for acclaimed motoring show Top Gear. ??What an amazing job it must be to go out and find amazing roads to drive on? To scout the world for the perfect scenic drive? Well, I suppose the only downside is then you have to spend far too much time filming it and not enough time just enjoying it.??

??
I didn’t apply for the job anyway. Far too little experience/skill/everything. But if I did, the Cabot trail in Nova Scotia would be the first place I’d come to film.
??

The Cabot trail….in a 1.6L Kia Rio!
??
The 300km long route is one the star attractions for any tourist in Nova Scotia and Canada for that matter. It winds along the coast and over the rugged Cape Breton highlands national park with amazing views every few miles.??
??

Great views from the road
??
The weather was perfect when we set off and we were hoping to spot whales and seals down in the numerous coves we passed. ??The area is a hotspot for whale watching but we were right on the leading edge of the season and the boats weren’t due out for a few days.
?? 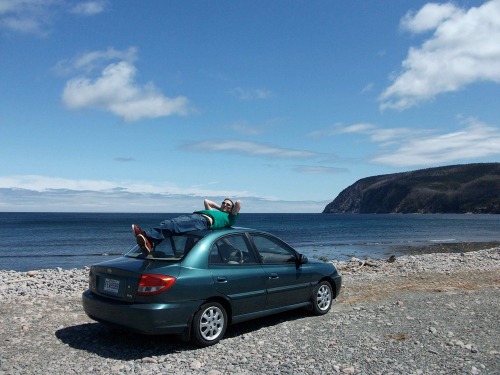 Bit of whale watching from the car. Don’t tell the hire company
??
However, you soon see why the boats aren’t out. Half way round with not a cloud in the sky, the weather suddenly turned as we headed inland and we were soon enveloped in thick fog and started seeing snow by the road as we ascended.??
??
The summer season here is extremely short. It doesn’t really start until mid-June and lasts until late September. You can see why it was so quiet. But this has its advantages too. We reached the peak of the overland section and saw a pair of moose trekking amongst the trees right by the side of the road. Our first moose sighting in Canada.
??

Beware of the moose! They’re not kidding

Moooooose!
??
We drove off the trail for an hour or two to visit the interestingly named ‘Meat Cove’ to try and spot a whale or two. ??They weren’t showing up though so we stopped off at a waterfall en route to our overnight hostel.
?? 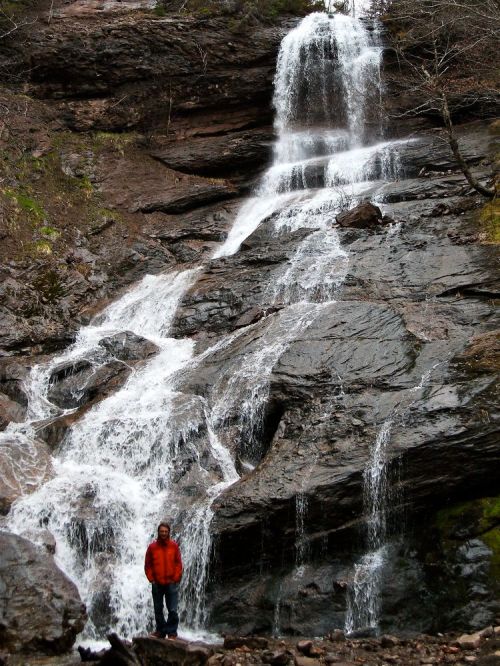 You can see this from the road about 5 miles away
??
The next day the fog had descended further and the high points of the trail were a white out. A shame, until we dropped out of the clouds and were treated to the most spectacular views of the trip.??The road is actually more popular with cyclists than drivers. Our host at an amazing hostel at the start of the route (Bear-On-The Lake) told us that they get around the route in 3 days which is an amazing 100km a day over difficult terrain. Perhaps we’ll be back to try that one day.

The best road in North America?
??
The experience is impossible to capture on camera, as I found when trying to film it using the GOPRO and little Fuji point and click camera we have. But, to not leave anyone who reads this blog disappointed, I thought I’d better knock together a quick film. Here are the results of a couple of hours frustration on the increasingly annoying Final Cut Pro the other night in Quebec City. Music courtesy of Steeleye Span. Enjoy!
??
The Cabot Trail, May 2010
??
??
??