A weekend up in the glorious mountains of the Laurentians in Quebec is something which makes coming to Canada worthwhile.

Canoeing on Lac Moore in the Laurentians
We’d started this leg of the journey in Ottawa, Ontario on the Thursday. I have fond memories of the city having visited on a CISV summer camp aged 11, and remembered the hot summers and swimming in the Ottawa river.  However, we were due to stay in the very interesting Ottawa Jail Hostel.  The place used to be a jail (obviously) up until the early 1970s, and I can honestly sat that not much has changed. Well, it’s been made a lot more comfortable. Cells have been knocked together to make dorm rooms, and extra loos and showers have been added. But there are still whole blocks of tiny 3m by 1m cells which are untouched.  In fact, there are regular tours around the building… not just because it was a jail but because it is supposedly one of North America’s most haunted buildings. 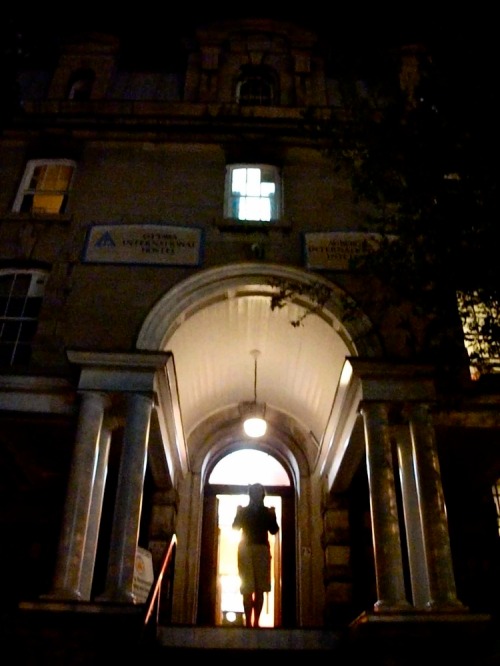 Ottawa Jail Hostel: Wooooooo! (that’s Nich in the middle)
I’d had no idea of this prior to arrival.  And, to make it interesting, the owner informed us that there was a party of one hundred 8th grade (12/13 year old?) children arriving for the night.

The kids arrive
The ghost tours then started and I could hear from the bedroom a tour guide explaining to visitors about the numerous sightings by hostel residents.  So, we spent two nights in a haunted house without really knowing about it. All I can report is that we heard someone hammering hard at one of the external walls at about 6.30am for around 20 minutes.  Apparently there were no workmen working at that time. I haven’t got any Hampton Court style conclusive proof or anything but never mind. Of course, I spent a lot of the night after getting back from the pub, clattering about in the corridors trying to scare the kids but i’m not sure that had much effect.
On then to Quebec. We drove through the town formerly known as ‘Hull’, (now officially ‘Gatineau’) and up the hills to Mont Tremblant.  The resort is a well thought of ski area and we’d arrived on the weekend of the Coupe du Quebec mountain bike race.

Downhill racer goes over a kicker

Nich watches a racer head down towards Mont Tremblant
We managed to catch the cross country on the Saturday and the downhill racers on the Sunday (today) and in between we watched the fantastic Red Bull Monte Descend. An event in which a cross country rider and a downhill rider team up and do laps of a part cross, part downhill circuit for 2 hours in the dark. The winner is the pairing with the most laps when the gong goes.  Great to watch.

Downhiller finishes another lap of the Mont Descende, about to tag his x-country team mate
After all that it was nice to get down to the beach to relax, even if the water in the lake was freezing. On a hot day, all you want to do is swim, but we watched a succession of people try and then run out screaming.  I mean, it was probably frozen solid less than two months ago. That didn’t stop the intrepid Nich though. After not much persuasion she went in…

It looks amazing, it’s freezing!
I think she lasted about 20 seconds!  That 20 seconds more than me however.  One more night here and then back to Montreal. Good times.