Having spent (most!) of the last 11 years of my working life based in Nottingham, I’ve decided to move up to Manchester to join a new team of technical staff working for BBC Breakfast News, Newsround as well as the regional programmes in the North West of the UK.

Following the much talked about move from London, BBC Breakfast launched this week in a brand new HD studio based in Salford Quays. I began my first week in the new job editing for the program which involves being in overnight, but I hope to get into some film making and various other aspects of the job in the near future.

The new studio is state of the art (if a little small!) compared to Breakfast’s former home in BBC Television Centre, London. It’s green, using roughly 10% of the power consumed by the old studio thanks to an LED lighting rig. Public response mainly seems positive so far, although there have been many comments about the new close-up shots of the presenters and the ‘garish’ colours of the new set! 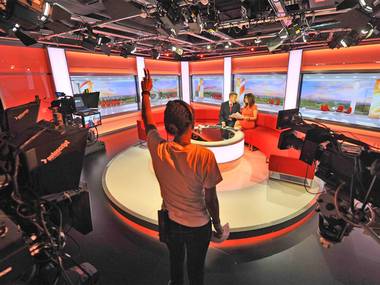 Come 8.30am the celebs start shuffling in to the green room area by the studio. So far I’ve had the pleasure of being feet away from Shaun Ryder, Labrinth the Inspiral Carpets, and of course the BBC breakfast presenters who seem like a pleasant bunch.

Here’s to the future!