I know it hardly feels like summer (that was way back in March I recall), but the most anticipated few weeks of sport in recent times is upon us. I can hardly wait. I travel to London a week today and will spend the Olympics in the thick of the action working for BBC Nations and Regions, filming as many success stories for the team GB athletes as possible, along with the inevitable heartbreaking failures.

I’m all set to go and have accreditation in hand along with my free travel Oyster card (woop) for the duration of the games.  I put my camera kit through it’s paces the week before last at Wimbledon and all seemed fine, apart from a few niggly problems which have now been ironed out.
As ever, Wimbledon was a great place to work and it was made all the better by Andy Murray winning through to the final day. I spent the week filming British juniors and the remaining interest in the seniors, namely the men’s doubles, and Andy Murray’s training sessions over on the practice courts.

Getting shots of Andy and coach Ivan Lendl – Note the raincoat.
It was a shame to see so many of the juniors exit in the early rounds, including the impressive Liam Broady whom I’d followed all the way through to the final last year. Let’s hope some of them can progress into the seniors next year. 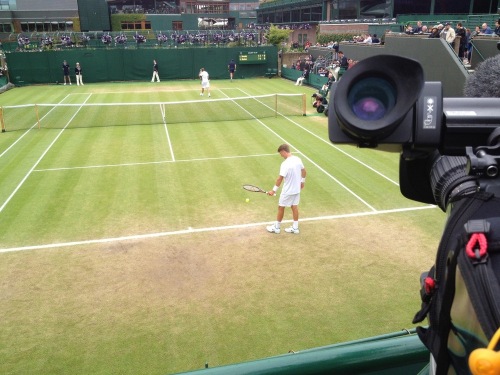 Filming Liam Broady in the boys singles
Still, the seniors came up trumps and it was great to film the early rounds of Jonny Marray’s thrilling run to the men’s doubles title. Having filmed him and his partner, Freddy Nielsen, from round 3 onwards I had to sneak up to centre court to catch a bit of the final. Once the players get through to matched on the show courts (1,2,3,12,18 or centre), I leave it up to the on court crews to get the match action while I concentrate on post match interviews. 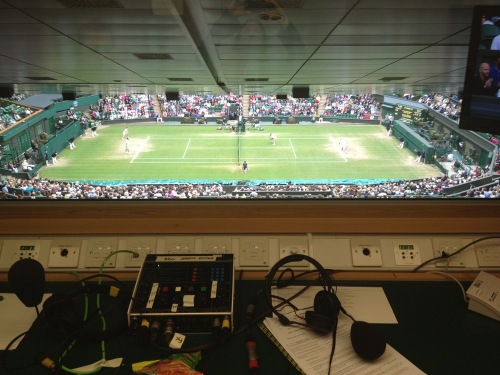 Watching the Men’s Doubles Final from a commentary box on Centre Court
For the men’s final itself, I flitted between filming a jam packed Henman Hill, the broadcast roof where Jon Inverdale was presenting from a rather strange tennis ball sofa, and court no 2 which was packed with yet more people watching on big screens. It was a shame to see Murray miss out, but Roger Federer is a class act who deserved it on the day, even if he does train wearing a shirt with his own face on it!

Federer wearing a Federer shirt. I might get a Cheeseman one.

The tennis ball sofa on the broadcast roof (housing John Inverdale with Greg Rusedski opposite)
Despite the weather it was a great week, I know many people are worrying about the conditions for London 2012 and I must admit, it was warmer in Vancouver in the build up to the Winter Olympics than it has been over the past week or so in London! Hopefully the warm glow of GB success will keep us happy.

One thought on “The Summer of Sport”