We’ve started our December Canadian snow adventure. We bought the snow chains for the rental car and the first stop was Big White. It took about 6 hours to get up here from Vancouver and we got a taste of things to come when we drove through the thickest fog I’ve ever seen in my life just outside Kelowna. You could see about 10 metres in front of the car for around 20km down a massive hill on Highway 97.  Thankfully we dropped out of the bottom of it without running into the back of all the trucks travelling at 30km/h. 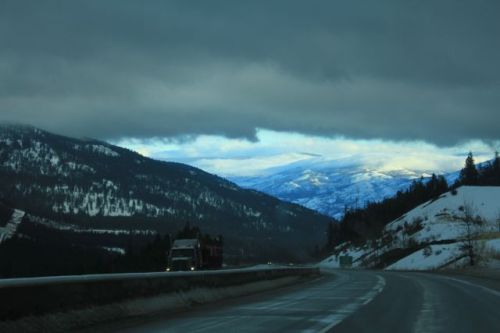 Dropping out of the dense clouds towards Kelowna.
We arrived at Big White to flurries of snow and had a look around. It was completely quiet after 9pm and incredibly foggy so we decided to get an early night and see if it would clear up by the morning.

Big White is well known for great snow
The snowboarding was unbelievable. The best snow I’ve ever ridden. It’s dry powder, not like the powder you get in the Alps or even Whistler. You glide through it and it doesn’t slow the board down at all. That combined with the sheer number of little jumps and glades along the piste edges make it immense fun. Only a third of the resort is open but there are so many ways down the mountain it won’t bother me for the 2 days we are here.

The Big White logo. It really is amazing snow.
What might bother us however is the visibility. It’s total pea soup fog everywhere and it didn’t shift all day and all night. Apparently that’s the one big downside to the resort. It sits on mountains above the vast Okanagan lake and so the moisture sits in the air for days on end. 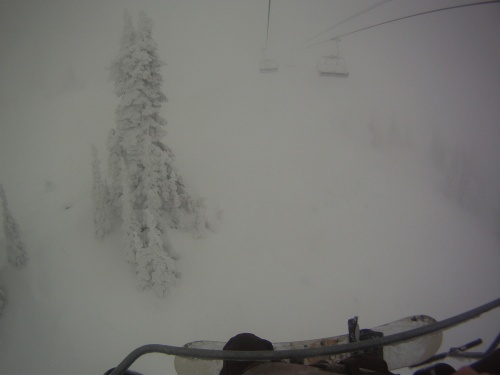 I usually judge visibility by how many chairs you can see on the lift in front. This is a definite 1!
Seeing this on someone’s door in our apartment building made me think we are definitely in for another day of fog tomorrow.